WHAT DOES THE MKMI LOGO MEAN?

The MKMI logo and symbol was designed by Apostle Mike to graphically portray the calling and international vision we’ve been given to fulfill. The logo is comprised of four arrows pointing toward the four compass directions on the earth: North, South, East, and West. It represents our commitment to fulfill God’s call on our lives, preaching the Gospel throught the world, going in whatever direction the Holy Spirit wants us to go.

WHAT DO WE BELIEVE?

All employees and ministry staff of MKMI Philippines, including SBI instructors and staff, stand in agreement concerning the following points of truth, revealed in the Bible, which is the Word of God:

1. Christianity is not an organization, denomination or religion, but a relationship between God and men, individually and personally.

3. Christianity, as a Divine relationship between God and man, is based upon the following truths as revealed in the Word of God, especially in the New Testament:

b. There is one God, eternally existent in three distinct persons: the Father, Son and Holy Spirit. (1 John 5:7/Matthew 3:16)

e. The sinless and perfect life of Christ. He is the Lamb of God who took away the sin (John 1:29), and the sins (Hebrews 1:3) of the world. “Sin” (singular) deals with our sinful nature (Ephesians 2:3). “Sins” (plural) deals with all a man’s willful decisions to disobey God’s will and word. (Hebrews 9:28)

g. The sacrifice and atoning death of Christ through His shed blood, and the reconciliation of man to God by that death and shed blood. (Hebrews 9:12/Ephesians 2:14-18)

k. There are 3 enemies of man on earth today. First, the devil and his demons. Second, the world system he controls to deceive men, and third, the flesh – our bodies. (James 4:1-7/Romans 8:7)

l. The fall of man through sin, and his present state of spiritual death, which makes a spiritual rebirth necessary by faith and faith alone. This rebirth is accomplished by believing and confessing Jesus Christ as one’s own personal Lord and Savior, trusting His work alone as the only way of salvation for mankind (John 3:16/John 10:9/John 14:6/Acts 4:12/Hebrews 9:28)

p. The word “everlasting” applies the same to the promised blessings in heaven for believers, as much as it does to the punishment and torment for unbelievers in the lake of fire. (Matthew 25:46/John 3:15-36/Revelation 20:10-15)

q. The present-day ministry of the Holy Spirit, Who bestows the spiritual gifts of healing, working of miracles, faith, the word of wisdom, the word of knowledge, the discerning of spirits, tongues, interpretation of tongues and prophecy. All these gifts are operating today in and through believers worldwide, and they will continue until the return of the Lord Jesus Christ. (1 Corinthians 12:1-11)

s. The great commission is the job and responsibility of every believer, to go into all the world, preaching the Gospel of Jesus Christ, and teaching converts the life of faith, love, sanctification and discipleship (Mark 16:15-18/Matthew 28:18-20/Acts 1:8)

4. There are six principles which make up the doctrine of Christ, as outlined in Hebrews 6:1, 2. They are:

a. Repentance from dead works.

b. Faith towards God.

d. Laying on of hands

e. Resurrection of the dead

WHO DO WE SUBMIT TO?

Apostle Mike understands and recognizes the importance of spiritual relationship and accountability. As such, he is presently ordained with several ministerial organizations. They are:

In addition, Apostle Mike and the MKMI ministry submits to the council, oversight and covering of their home church, and to a handful of mature, experienced men of God.

HOW IS THE ORGANIZATION OF MKMI?

MKMI is an independent non-denominational ministry, serving the entire body of Christ as led by the Holy Spirit. We recognize God and His Word as the final authority in everything we say and do. MKMI endeavors to spread the full Gospel of Jesus Christ throughout the world, helping other ministers and ministries do the same.

Our vision is threefold:

MKMI is a recognized and approved non-profit religious organization, maintaining the 501(c)3 status with the USA Government and their Internal Revenue Service.

In the Philippines, MKMI has also been recognized and approved as a non-profit religious organization with the Philippine Government and their Securities and Exchange Commission.

CAN YOU TELL ME MORE ABOUT APOSTLE MIKE?

Apostle Mike was born November 22, 1951 in Cleveland, Ohio. Raised in a strict Roman Catholic family, he attended Catholic grade school and high school before attending Bowling Green State University in Bowling Green, Ohio. In 1973, Apostle Mike graduated from BGSU with a Bachelor of Fine Arts degree with a major in graphic design. As a fine artist, he won many awards in local, state and regional art shows for his work. As a graphic artist, illustrator and art director, Apostle Mike was successful working for a number of design studios in Toledo, Ohio. From 1974 to 1976, Apostle Mike worked as a graphic artist, designer, copywriter, as well as a radio and television producer for Hickory Farms of Ohio, a national cheese store chain based in Toledo. In January 1977, Apostle Mike joined Owens Corning Fiberglas® as a merchandising and sales promotion supervisor. His responsibilities included the development and implementation of all advertising, sales promotion and public relations programs for three industrial insulation marketing divisions of OCF. In 1978, which was Apostle Mike’s last full year with the corporation, his approved operating budget was over one million dollars.

Apostle Mike was born-again September 21, 1978, and filled with Holy Spirit two days later. Immediately the gifts of the Spirit began working, and an intensive street witnessing ministry was started in downtown Toledo. Through his local home church, Apostle Mike was put in charge of many outreach activities while still working full-time for OCF. These outreaches included monthly visitations to area prisons and juvenile prisons, street witnessing during lunch hour when working, and on Saturdays most weekends. An extensive tract distribution program was implemented at major transportation facilities such as the city bus station, and the Toledo Express Airport. On his own time and with his own money, Apostle Mike would order, stamp and pass out thousands of tracts monthly. God opened doors of opportunity supernaturally to accommodate his zeal and availability, and tens of thousands of people had Gospel tracts handed to them as a result. At the airport, Apostle Mike created a master list of all incoming and outgoing flights, and each Saturday on his own time, would be at the gate to give tracts to all those coming in or going out on flights. Tracts were placed everywhere – in airport lavatories, phone booths, under windshield wipers in the parking lot, wherever they could be placed. In addition, thousands of tracts were distributed at local malls, shopping centers, bars and even strip joints.

In September 1979, responding to God’s call to full-time ministry, Apostle Mike resigned his position at OCF to attend RHEMA Bible Training Center in Tulsa, Oklahoma. In May 1980, he graduated from RHEMA and in September 1980, left the USA for full-time missionary work in the Philippines. Having just enough money to buy a one-way plane ticket to the Philippines, Apostle Mike arrived with only a few dollars in his pocket, his notes and books from Bible School, and the promise of support from only his parents and one small church in Toledo, Ohio. No one was there to meet him when he landed. He didn’t know the language, the customs or anything else. He just knew God had sent him! He made his way south from Manila, and from September 1980 to December 1982, Apostle Mike worked with a Filipino and his ministry, living and working out from Tagbilaran City, on the island of Bohol. He traveled extensively throughout the mountains and coastal towns of the islands of Bohol, Negros, Cebu, Leyte and Mindanao. Many open-air evangelistic crusades were conducted, and thousands were saved and miraculously healed in his simple outdoor meetings. Hundreds of churches were also visited for ministry, with most churches having only a handful of people. Some were so high up in the mountains, clouds were actually rolling through the church during services! Whenever h e returned to Tagbilaran City, Apostle Mike taught in his host’s Bible School, and served as the principal of that school for the 1982 school year. In January 1983, receiving God’s clear direction to separate and start his own work, Apostle Mike left Tagbilaran City and moved to Ozamiz City on the island of Mindanao. There he founded Mike Keyes Ministries International, which has developed into the international outreach and missionary ministry it is today. Presently, MKMI employs over a dozen full time employees in the USA and the Philippines. The ministry touches people all over the world, and continues to grow and expand as support allows.

FAQ ABOUT THE PHILIPPINES SUMMER TOURS 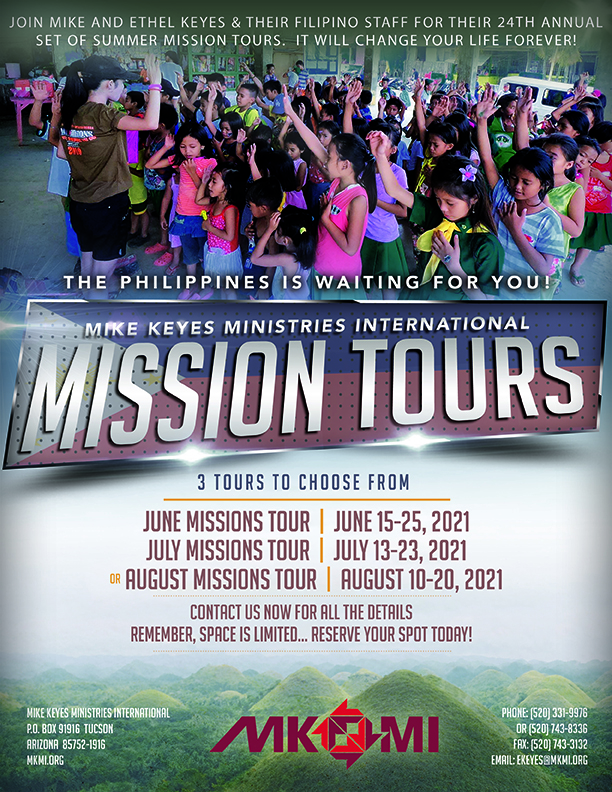 WHEN IS THE NEXT PHILIPPINES TOUR?

WHAT IS THE COST?

$2,950 per tour per person, with a $1,400 deposit required. Your place on the Tour is not secured until the amounts for the first three installments ($1,400) has been received.

Here’s your opportunity for you, you and your spouse, or you and your family to obey the Great Commission firsthand!

You will be doing all these things while working alongside Apostle Mike and his staff of ministers and workers, preaching the Gospel in obedience to Mark 16:15-18.

You can participate as much or as little as you prefer. Jesus said to watch and pray, so you can watch, you can pray, you can preach, or do as much or as little with us as your heart desires – but this is God’s invitation to you to get out there and get involved! It’s seven days of hands-on, frontline evangelism in the harvest fields of the world! It’s Exciting. It’s Fulfilling. It’s Rewarding. C’mon and join us while seats are still available on the plane! We’d love to have you with us!

STAY UP TO DATE WITH MKMI

Now you can get our newsletter by email. Just send your email address by text message.